“Well, everyone in Coreseum needs a role. It’s my job to make sure those roles match an individual’s talents and interests.”
-Burton, The Blue Moon Narthex

When Cole, Sophie, and Britten arrived in Coreseum, they were curious (and worried) about what their roles would be. We all want to know where we fit. We want to discover what we do best. It would be easy if we had a role-finding machine like the one Burton used, but most of must discover our roles by trial and error.

I started experimenting with different jobs at a very young age. I was lucky. My dad owned an earthmoving business and his shop was right across the road from our house. By the time I was nine years old, I knew how to drive bulldozers, belly scrapers, and road graders. I got to watch my dad tinker. My first official job was power washing the mud off of the heavy equipment.

I had paper routes and, in early high school, I tried telemarketing for two weeks. That role definitely wasn’t a fit. I can’t remember (or I’ve suppressed) what I was even trying to sell. I asked my dad if I could quit. He said I had to find a new job first. That’s when I started working for the local blacksmith.

In a rural community, the blacksmith had to know how to fix anything a farmer could break. It was great! I got to learn how machines worked, how to weld, and how to repair almost any piece of equipment. That was a role that fit and one that led to the steel fabrication business that I own today.

What I learned from these early jobs is that I’m fascinated with how things work. I enjoy creating things, whether in the real word or on the pages of a book.

Want to discover your role? Try a few things out and see what you enjoy and where you experience success. 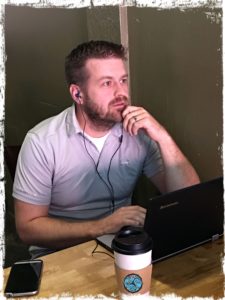 My journey toward writing a novel began with building imaginary gadgets and worlds in my mind that started from a simple idea. The story around those came later.

I’m a builder. As a kid, my two sisters and I, along with our three cousins, would build forts in the barns or the trees at my uncle’s farm. We’d scavenge for any scraps of wood we could find, then spend hours planning the “what if,” sawing, and hammering. Our parents still remind us how many hammers and saws we lost.

We didn’t have nearly as much fun playing in those forts as we did building them. As soon as we finished a fort, I was already dreaming up the next one. What if we made it taller, or bigger, or built it in a different place? We could discuss ideas for hours.

The ideas for my novels started the same way:

What if… someone had a device that could help control Karma? How would it work? What would it look like? What powers would it have?

What if… that device could be concealed on a wrist cuff, or necklace, or at the top of a cane, and the world thought they were ordinary objects?

And on and on. I made drawings of objects and filled pages with maps and blueprints of the world. Then the story began to emerge. What if the members of the secret society had to keep the powerful devices out of evil hands?

Just like the forts I built as a kid, I love creating the worlds for my novels. Much to the chagrin of my editors, I still spend most of my time thinking what if…

Want to know more about the devices and world I imagined? My first book The Blue Moon Narthex, is available for pre-order now on Amazon. We also have a giveaway running now:click here to enter! 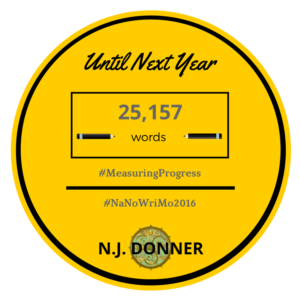 Wednesday was the last official day of NaNoWriMo. Did you get as far as you wanted? I didn’t. But that’s not the end of the story.

Writing is a journey, and sometimes a story takes us on detours. Eighteen months ago, I thought I’d finished my first novel, so I found an editor and discovered I had finished a rough first draft. The story had more to say. I had more work to do. I’m glad I didn’t give up on the process.

Sometimes it’s hard to measure our progress as writers. We type away early in the morning or late at night, usually by ourselves. We often don’t get as many words on the page as we hoped, but that doesn’t mean our work is futile. I’ve found that sometimes my fingers need to stop typing so my mind has time to catch up with the plot, or the character, or the setting I’m trying to create. I must allow myself time to think.

We need others to help us see our progress. I have an editor/writing coach who helps me notice and celebrate milestones along the way. My wife is also a great cheerleader. Find your people—those who will encourage you, challenge you, and remind you that progress isn’t always measured in word count.

Celebrate your progress during NaNoWriMo. Share it with me and others in the comments below so we can cheer you on.